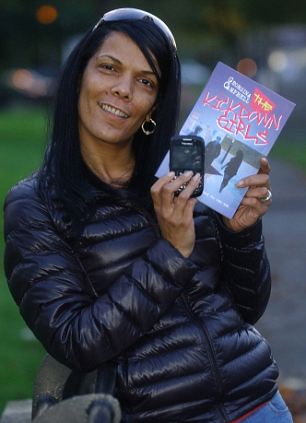 Georgina Campbell decided to pen her first book after a ‘bet’ with her 14-year-old daughter Lorra – and wrote 55,600 words of her first novel on her BlackBerry Curve Smartphone’s QWERTY keyboard.

The 41-year-old said that she made a bet with her daughter after watching 2011 Brit movie “Attack The Block” last year – a film about a street gang in south London fighting off an alien invasion. Miss Campbell, from Vauxhall, south London, said, “‘Lorra and I were watching this movie Attack The Block and she thought it was brilliant. I thought it was rubbish and said that I thought I could write a better script, so we challenged each other to write something.”

She said that as soon as she started writing on her Blackberry she became ‘immersed’ in the task and soon rattled out more than 55,600 words – filling up 200 pages in just four months.

Miss Campbell, who has worked as a chef at the US Embassy in London, said:, “‘I started typing on my Blackberry because it was something I had with me all the time and could easily just take out and start typing anywhere.”  She said that as soon as she started writing on her Blackberry she became ‘immersed’ in the task and soon rattled out more than 55,600 words – filling up 200 pages in just four months.

The end result was a book, called ‘The Kickdown Girls’ about a group of girls growing up in south London, described as a ‘gritty thriller’, which has now been published.

She said, “‘When I started writing the book I would normally do it after a 12-hour shift at work and it would be a breeze – I loved it and wrote through the night. It was almost like a holiday – I’d just sit down and start typing the book out on my Blackberry using my two thumbs.”

‘”It was one of the most satisfying things I’ve ever done – and to have it published it just amazing.”