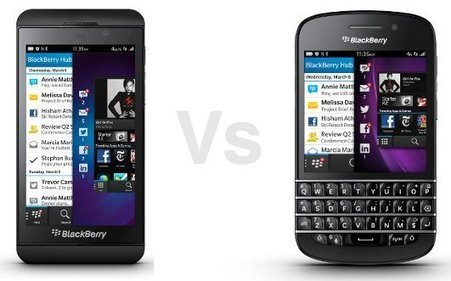 As many of you are probably aware I have been sporting around the BlackBerry Z10 since April 29th when Verizon released their pre-orders. The BlackBerry I had before was the 9930 and honestly I wasn’t sure if I could get use to not having the physical keyboard but I decided to give it a try anyhow. Well needless to say I have had no issues (no reboots, no dropped calls, nothing) with the Z10 but in the back of my mind I was missing that great BlackBerry keyboard that I have become use to over the years. Well as of June 13th I now also have the BlackBerry Q10 and I want to give you my thoughts and comparison on a few things.

Keyboard
The BlackBerry Z10 keyboard is great, in fact I was able to type on it better than I expected. With the device predicting words as I go along it made things easy. I really liked how the Z10 would learn words that I use more often and start to fix my mistakes based on those words. It has a nice auto correction feature and it did fix a lot of mistakes I would make. That being said there were times when I first got the device that the Z10 would “correct” words that were spelled right and what I intended it to be to something that it thought I wanted, which was a pain. Another nice feature is the ability to “flick” words as they are being predicted to me, and as I became use to the feature I was able to flick an entire sentence up into my messages which saves time. My overall impression of the BlackBerry Z10 keyboard is that it’s a easy to type on but I was still having some issues with my typing abilities on it and I was making a lot of mistakes.

The BlackBerry Q10 keyboard to me is just the best one that BlackBerry has. I love how easy it is to type on it and I am just so much more accurate with what I am trying to type than I have been on the Z10. If you’re like me and still want help with word suggestions don’t worry because it has that as well. With the learning capability of Q10 you get personalized intelligent word suggestions and contextual auto correction. The Q10 keyboard now has a different look to it than my older BlackBerry 9930 did. There is no more keypad or any of those keys that use to be on the top portion of the keyboard. At first I thought not having the keypad would slow me down but it hasn’t at all (maybe because I was use to it from the Z10), in fact I haven’t even thought about the missing keypad at all. If you look at the keyboard closely you will see that each button is sloped so that there is a portion that is elevated and designed to prevent from tapping the wrong key. Now I know there will be some of you that say the virtual keyboard on the Z10 is the way to go, but for me I love the physical keybaord on the Q10 so much more.

Screen Size
This is one area that I loved about the BlackBerry Z10, with it having a 4.2-inch, 1280 x 768 resolution LCD and the display on the device looks absolutely amazing. It’s nice and bright, even under sunlight and the colors, contrast and viewing angles are all top notch. To me this was one of the biggest advantages of coming from the 9930. Every device I had in the past always had a small screen and now seeing this big screen was one of the big reasons that I decided to try out the Z10. It’s great to watch videos or play games on and even though I’m not much of a mobile gamer this was one of the first things I knew I would miss if I decided to go with the Q10.

The Q10 has a 3.1 inch Super AMOLED touchscreen and offers a resolution of 720×720 which makes it quite a bit smaller than the Z10. Now don’t get me wrong here even though the screen is smaller the display is still sharp in detail and colors. The Q10’s Super AMOLED display is more energy efficient (which will help with the battery) than the LCD on the Z10 as well. Like I said before the screen size is a definite plus for the BlackBerry Z10.

Battery
This seems to be one of the biggest concerns for everyone and it is for me as well. I have always noticed that when a new OS is released for a certain carrier the one question I see the most is, how’s the battery life? Well even though I have only had the BlackBerry Q10 for just a few days I can see that the Q10 is superior in that department. The Z10 has a 1800mAH battery versus the 2100mAH battery that’s in the Q10 but if you’re anything like me the only thing that really matters is how the battery lasts in everyday use. I  consider myself a very heavy user as I’m using my device pretty much all day long and on my Z10 I noticed that by lunch time I needed to either switch out the battery or find all place to plug it in, but on the Q10 it’s almost dinner time and with the same exact use as always I still have 22% remaining.

Apps
I just wanted to point out that there is still a small gap between the Z10 and Q10 as apps are still being made compatiable to work with the Q10. When I switched my BlackBerry ID to the Q10 as usual all the apps carried over but when I went to start downloading them I did notice that I did lose one of my paid apps so hopefully the developers get all the apps to run properly on the Q10 soon. As far as my sideloaded apps go (Instagram, KiK, and Flipboard) I had no major issues with them, but Instagram looks and runs nicer on the Z10.

Overall
The BlackBerry Z10 is a great device and I have truly enjoyed it but my daily device from now on will be the BlackBerry Q10. Even though I will miss the screen size on the Z10 (don’t worry I will still keep my Z10 on standby for those times I need a bigger screen) I really can’t do without the physical keyboard on the Q10. In fact there is another cool feature that I failed to mention earlier that’s on the Q10, it’s called Type and Go. Basically this feature just makes sending messages (text, email, BBM, Facebook, Twitter or even LinkedIn) so much easier. For example, typing “BBM” and then a contact’s name will launch the BlackBerry Messenger app and then just add him/her as the recipient. From there I’m all set to start chatting with the person I wanted. It’s a very neat system and helps make the BlackBerry Q10 so much smoother.

Now that you know my thoughts and opinions on both of the BlackBerry 10 devices let me just say no matter which one you decide to go with you will not be disappointed. The new OS is just tremendous and I only see things getting so much better. When I first received my BlackBerry Z10 it came with OS 10 pre-installed and I then moved up to OS 10.1 and things improved dramatically, which shows BlackBerry is hard at work. On the Q10 it came pre-installed with OS 10.1 and now I’m just waiting on OS 10.2.  We may be missing a few key apps but over time I feel those apps will join the platform as well. I have personally been a member of Team BlackBerry for many years and I truly can’t wait to see what the next few years will bring.

If you need even more info on the BlackBerry Q10 then check out Michael’s in-depth review or head on over to the offical BlackBerry Q10 website. Make sure to keep coming back to BlackBerry Empire as we all try to keep you up to date with all things BlackBerry.