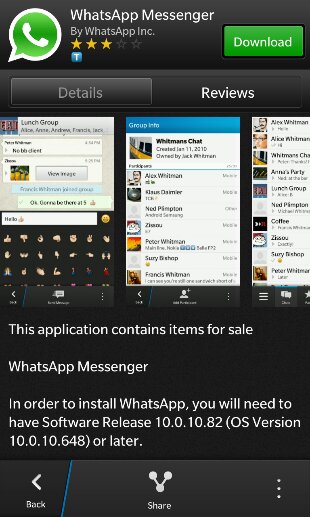 For all you with a BlackBerry Z10 on the Verizon network or even other networks we have some good news for you today. Looks like the very popular Whatsapp Messenger has been updated to version 2.9.4662.0 which allows the app to work on the older numbered OS that is on the Verizon Z10 device.

For all of you that already have WhatsApp installed here is the changes in this latest update:

I’m not a WhatsApp user myself but it’s great to see the developers fixing a issue so fast to allow the Verizon customers to use the app as well. Still no word on when we will get the latest OS release from Verizon but at least WhatsApp was listening. So if you have been waiting for this app to work on your BlackBerry Z10 or already have it then head over to BlackBerry World and download/update it now.