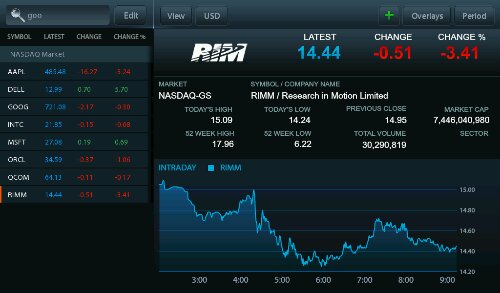 Investors are starting to love Research In Motion. RIM’s stock (NASDAQ:RIMM) jumped more than 10%, briefly passing $15 a share for the first time since February of last year before ending yesterday at $14.95. The launch of the BlackBerry 10 operating system, which is set to take place at the end of this month, has really sparked interest and optimism in investors.

Representatives from Verizon, AT&T and Sprint confirmed support for RIM’s upcoming BlackBerry 10 smartphones which is an early positive sign in itself. Just this weekend in a Portathon that lasted 37.5 hours, VP of developers at RIM, Alec Saunders, managed to get developers to port a total of 15000 apps to BlackBerry 10. That’s an app submission every 9 seconds.

“There is a lot of speculation that RIM can continue higher, with even more anticipation for the BlackBerry 10 release with the Apple news [Monday],” Joe Kinahan, chief derivatives strategist at TD Ameritrade, told the Wall Street Journal. “Investors are betting that, with momentum from Apple slowing, the momentum in RIM shares will pick up.”

Hype for the BlackBerry 10 has helped push RIM’s stock above the single-digits in recent months, even as the company reported its first ever decline in subscribers in December. The stock has nearly doubled from just under $8 at the end of October to close at just under $15 Monday. Part of the people leading the hype are BlackBerry South Africa who started a trend on twitter #BlackBerry10JNB engaging ‘BlackBerry People’ with the chance to win tickets to a fan event in Johanesburg, South Africa on January 30.

I hope you all marked you calenders, 15 days left!