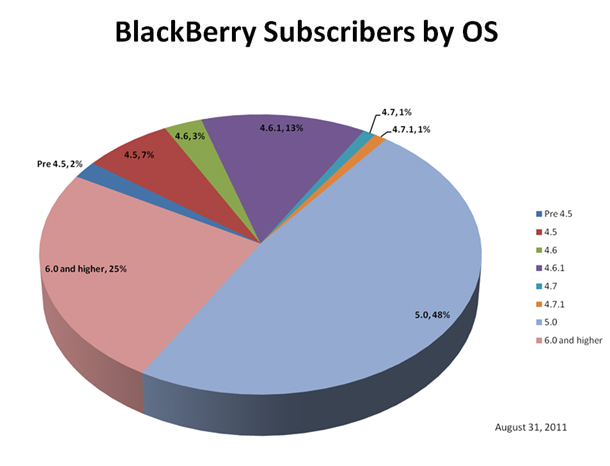 A while back RIM released device stats giving us a rough estimate of OS usage between BlackBerry Smartphones. RIM has just released from the BlackBerry Developer Zone, the latest OS data from May. Probably the most interesting stat from the data shows that in-market devices running 6.0 software has jumped a full 8% from March of this year, now at 18%. RIM is only taking into consideration 3 devices when it comes to measuring BlackBerry 6 – Torch 9800, Bold 9780, and Style 9670. Judging from all the BB6 talk since the release, BlackBerry 6 usage should hold a higher percentage if unsupported devices were counted. Think of all the Bold 9700’s , Curve 3G and Pearl 3Gs that have undergone the transformation from OS5 to 6. None the less, OS5 still holds the majority of BlackBerry smartphone usage at 50%. Check below for more stats.

Subscribers running BlackBerry 6 are taking advantage of free apps and software in the BlackBerry App World because 31% of free app downloads come from  6.0 devices. It also looks like Storm users don’t even bother to mess with the App World.

Also interesting, looking at the paid apps downloaded from App World, 94% of BlackBerry smartphone users have devices with OS 5.0 and 6.0 software. An increasing number 6.0 users are now purchasing paid apps as compared to last quarter; with 6.0 devices making up 54% of all paid app downloads.

So devs, here are your new target data stats. As for nerds like myself, this gives us a comprehensive snapshot of BlackBerry OS usage so we know what apps to post on :D.