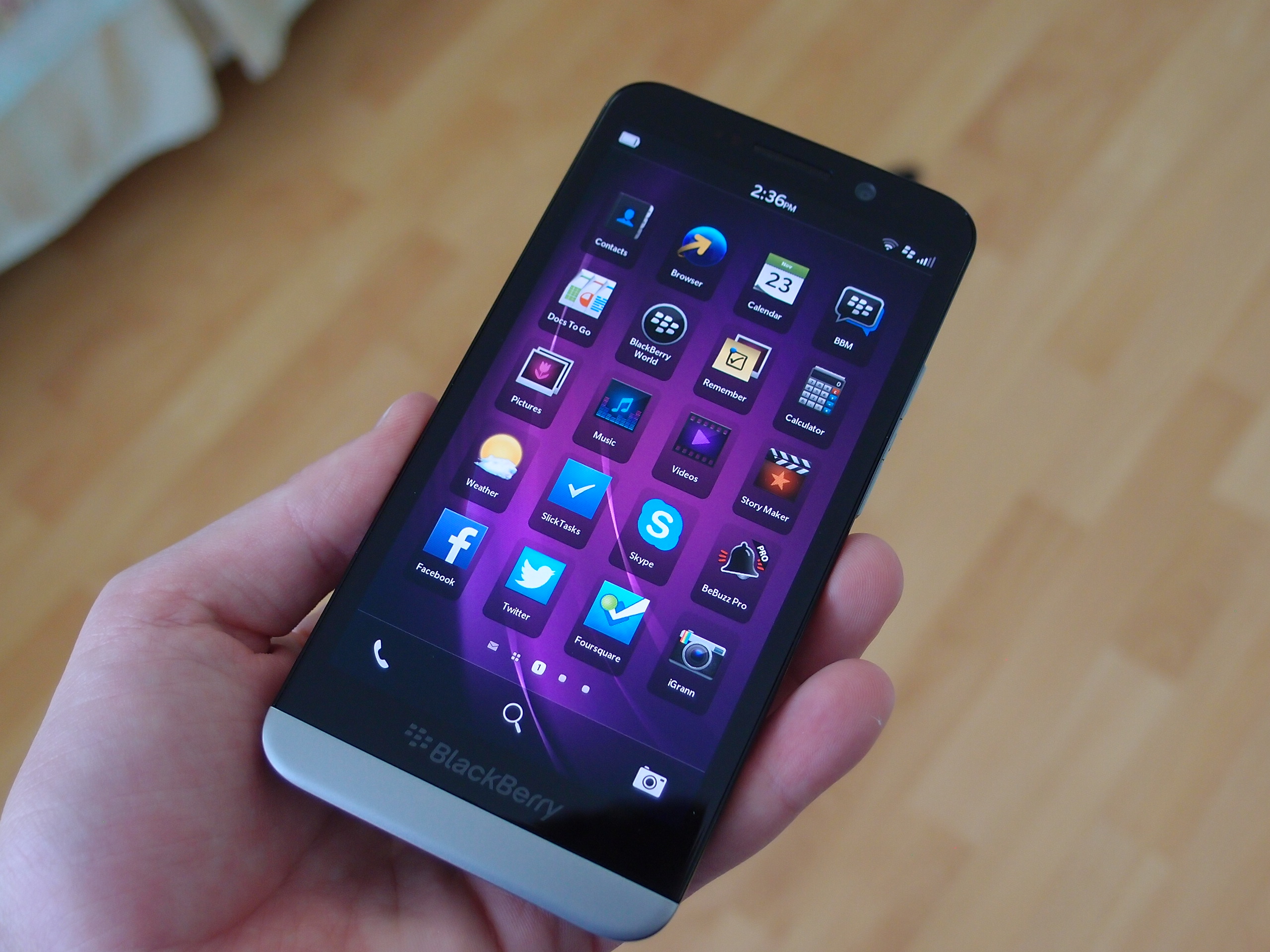 BlackBerry 10 may well be a very young OS, but a whole lot has happened to it in the last ten months. We’ve seen four OS updates roll out, and now we have a new flagship device – the Z30. So, let’s have a look and see if this phone has what it takes to carry the torch forwards for BlackBerry 10.

When you first open the Z30’s packaging, you’ll immediately notice that this is a fairly sizable phone, but it’s not unwieldy – it’s just plain big. With a 5-inch display, it falls into the same size category as the Samsung Galaxy S4, but the body of the Z30 is actually slightly larger. Despite its size, it’s very comfortable to hold thanks to the rounded, glass weave back. My review unit came with a whole host of goodies, but retail units will likely come with the usual set of kit – headphones, microUSB cable, and wall plug.

Opening the backplate on the Z30 is, by far and away, my biggest gripe with the Z30’s hardware – it is quite literally painful. An immense amount of force is required to get it off, and most of the time I found myself reaching for a credit card to help me pry it open. As a result, it’s also very easy to scratch the bottom of the phone while trying to pry the cover off. Since the battery is non-removable, you should hopefully not have to do this often, but you still need to remove the back door to access the microSIM slot, microSD slot, and to attach the BlackBerry Flip Shell case.

That aside, the Z30’s hardware looks and feels excellent. Nothing about it feels even remotely cheap, and it’s quite ergonomically designed for a phone of its size. The screen feels very smooth and is much more resistant to fingerprints than the Z10.  At 170 grams, the Z30 is rather heavy for a modern smartphone, but the weight is well-distributed and I never found it to be an issue. All-in-all, initial impressions are pretty positive – time to dig a little deeper.

At the heart and soul of the BlackBerry Z30 is a 1.7GHz Qualcomm Snapdragon S4 Pro dual-core CPU – effectively an overclocked version of the 1.5GHz unit found in the Z10 and Q10. However, this CPU is paired with the Adreno 320 quad-core GPU, which theoretically allows for significantly better graphics processing than seen on other BlackBerry 10 devices. Casual games like Angry Birds or Minion Rush may not show much difference, but more demanding games like Real Racing 3 definitely benefitted from the added oomph in my testing.

As is par for the course, the Z30 packs 4G LTE connectivity, as well as the ability to fall back onto HSPA+, 3G and EDGE. However, the Z30 makes use of Paratek Antenna technology to ensure better signal in areas where signal is normally quite weak, allowing for fewer dropped calls and improved data transfer rates. This seemed to be the case in my testing, as I consistently got faster data rates in low-signal areas compared to the Z10. The antenna also plays a role in improving battery life, which I’ll cover a little later.

Beyond that, the Z30 has a few smaller goodies that are foregone on the Z10 – namely Miracast, WiFi Direct, and USB On-The-Go. Verizon’s version of the Z30 will also pack wireless charging, though unfortunately it doesn’t seem like any of the other versions support it. The Z10’s hardware simply doesn’t have the support for any of this, although the Q10 and Q5 both offer Miracast and WiFi Direct on OS 10.2.

As far as the rest of the innards go, it’s all pretty similar to the Z10/Q10 – 2GB of RAM, 16GB of internal memory, support for 64GB microSD cards, dual-band WiFi a/b/g/n, Bluetooth 4.0 LE, NFC and GPS with A-GPS support. Even the cameras are basically the same, with an 8MP rear-facing unit (with flash) and 2MP front-facing camera. The former supports 1080p video, while the latter goes up to 720p. These cameras aren’t outstanding, and considering the competition I rather wish BlackBerry had included something better, but they have no major flaws and will get the job done for casual shooters.

The screen on the Z30 is a 5-inch SuperAMOLED unit with a 1280×720 resolution, resulting in a pixel density of 295 pixels per inch. This isn’t a lot nowadays, but because the display is so large, you tend to hold it a little further back, so the lack of density isn’t a huge issue. I still wish they went with a 1080p display, but unless you’re comparing it side-by-side with a 1080p device, the Z30’s display never feels subpar. As far as brightness goes, it definitely isn’t as bright as the LCD unit on the Z10, but I didn’t find that to be an issue – sticking around half-brightness worked for most occasions, while maximum brightness was only necessary in direct sunlight. Colours are very vibrant on the screen as well, not to mention the deeper blacks that come as a result of using an OLED panel.

Let’s cut to the chase – the Z30’s battery life is exceptional. The phone packs a 2880 mAh battery, by-far the largest battery ever found in a BlackBerry smartphone. BlackBerry claims this results in 25 hours of mixed use, and that’s easy to believe – I managed to squeeze 39 hours out of my review unit in light-to-medium usage before hitting 10-percent battery, although I stuck mostly to WiFi throughout the second day. Some folks were concerned about the lack of a removable battery, but with battery life this good, I really don’t think it’s necessary. If you’re still worried, BlackBerry should eventually sell the backup battery charger that comes with review units – this packs an extra 2100mAh of juice, and will plug right into the microUSB port while you’re on the go. I never found the need to use it, but it might come in handy for super-heavy users who manage to put the strain on any device’s battery.

BlackBerry put a whole lot of effort into the sound experience on the Z30. The phone packs four microphones – your basic one at the bottom of the phone, a noise-cancelling unit in the top speaker at the rear, and two more noise-cancelling microphones on the right side of the phone. Combined with the stereo speakers, this creates what BlackBerry calls the Natural Sound experience. However, to take full advantage of this, you need to be making a Z30-to-Z30 call on BBM – the codecs used don’t apply to regular phone calls, and if the other end doesn’t have a Z30, they won’t have the right speakers nor the right microphones. Nevertheless, I can confidently say that the speakers on the Z30 are absolutely fantastic. They remain crisp and clear even at high volumes, and I’m pretty sure the only phone available today that could rival these is the HTC One. I have to hand it to BlackBerry; they absolutely nailed this part of the equation.

As far as regular calls go, the Z30 takes care of these without a hitch. It has full support for HD Voice, and the Paratek Antenna should keep dropped calls to a minimum. I never got any complaints about my voice on the other end either. The earpiece seems just a little quiet at times, but I never found it to be a big deal.

The virtual keyboard on the Z30 is exactly the same as the one on the Z10, just bigger. This is a bit of a double-edged sword – on one hand, the extra space makes it much easier to hit the right key every time, but on the other hand, it does make one-handed usage a bit more difficult. It’s not catastrophic, but those of you with smaller hands might find yourself avoiding one-handed usage a little more than usual. For me, however, the keyboard was excellent – just as it should be on a flagship BlackBerry.

The BlackBerry Z30 is the first phone to ship with BlackBerry 10.2. My review unit was running OS 10.2.0.1443 at first, which you’ll find is actually an earlier version than what other BlackBerry 10 devices received when they were updated to 10.2. This version of the OS is missing the ability to hide the bottom bar in Android Player, the ability to toggle dark theme in certain apps, and presumably some bug fixes. It was later updated to version 10.2.0.1803, which includes all those features, but some carriers may still have the earlier OS.

OS 10.2 is a great step in the right direction. It brings loads of new features, including:

As far as issues go, I haven’t really encountered anything major in my testing. A few minor hiccups might crop up, but certainly nothing that degrades the overall experience.

Apps have always been the Achilles’ heel of BlackBerry 10, and the Z30 is no exception – big names like Instagram, Vine, Snapchat, and Netflix are, officially, all still missing. However, things are getting better, with third-party clients like iGrann and Whine trying to fill the gap. Moreover, if you’re willing to try your hand at sideloading, sideloaded apps run significantly better on 10.2 than before. The next OS update, 10.2.1, is set to make sideloading much easier, while making it even simpler for developers to port their Android apps over. But as it stands right at this moment, things are still far from ideal – this is a problem that’s going to need time.

There are a number of ways of looking at the BlackBerry Z30. For all you Z10 owners out there, this may not necessarily be worth the upgrade – it’s certainly a better phone, but not by any means a quantum leap. Some of you may appreciate a smaller form factor too, in which case this is probably not the phone for you.

For those who want to know if this is the phone that will save the company, I think it’s safe to say that it isn’t. BlackBerry’s problems are far too complex for a single phone to turn things around – the company needs time and a series of compelling products. Some good marketing is in order too, as the marketing push for the Z30 has been pretty lackluster.

But for those who have been on the fence about BlackBerry 10, and just want to know whether or not this is a good phone, it absolutely is. What it lacks in pixel density and photographic finesse, it makes up for with plentiful screen real estate, great sound, and outstanding battery life. Unless you remain faithful to the physical keyboard, this is arguably the best phone to ever come out of Waterloo. If you can live with the app gap, the Z30 is definitely worth considering.