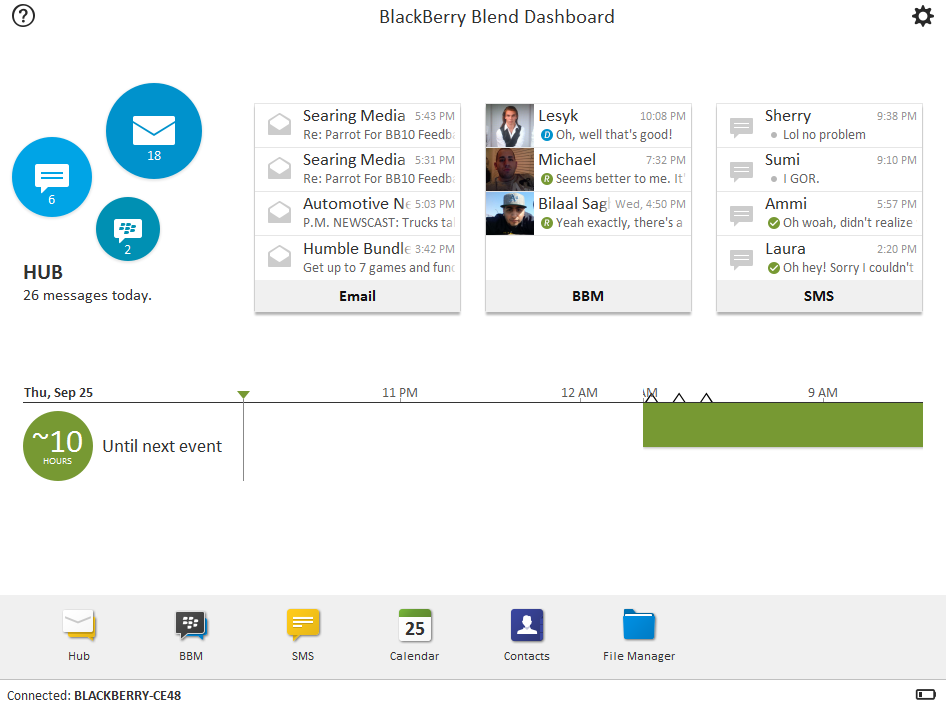 Along with the launch of the Passport on Wednesday, BlackBerry rolled out an interesting new piece of software – Blend. I took it for a spin with my Passport to see just how good it really is.

Blend offers a lot of the core functionality of your BlackBerry smartphone directly from your computer or tablet. This includes access to BBM, email, text messages, contacts, files and your calendar. I used it on Windows 7 and 8, but it’s also available for Macs, as well as iOS or Android tablets.

There are a couple different ways to connect your phone to a device with Blend. A simple Internet connection, either through WiFi or the mobile network, is enough. But it can also be done through a USB connection if you don’t have access to the Internet. Wireless connections are paired by logging you’re your BlackBerry ID, and then matching a passcode that appears on the phone to a passcode that appears in Blend. USB connections skip this process, seeing as they already require a physical connection.

Visually, Blend packs a user interface that takes most of its inspiration straight from OS 10.3. It’s not going to blow you away, but it works. The only issue is support for HiDPI displays – this clearly needs work. The interface worked just fine on my large 1080p desktop monitor, but felt quite small on my Surface Pro 3. It doesn’t ruin the experience most of the time, but Blend’s built-in notifications appear so small that they simply aren’t effective.

As for the core functionality, everything Blend provides works really quite well. Even with the phone on the mobile network, Blend receives new messages near-instantly. I never saw anything resembling an unacceptable wait time. Images in emails can take a little bit of time to load, but not to the point of being irritating.

The range of actions Blend allows you to accomplish away from your phone were as useful as they sound. Rather than reaching for the Passport every time I got a new message, a quick alt-tab allowed me to respond right away. And if you need to compose a new message, add a calendar appointment, or add a contact, you can do that too. It’s the kind of productivity that feels distinctly BlackBerry.

One of the more surprising parts of Blend was actually the file manager – it can do more than I would have imagined. In addition to providing a way to transfer files to and from the phone, it allows you to access any cloud service linked to the device, as well as any computers connected through remote file access.

Though it was mostly smooth sailing, I did come across a couple of bugs. One was an oddity with email formatting – specifically fonts appearing far too small. They looked perfect on the phone, but on Blend you could barely tell the text was there at all. Fortunately, this only happened with a couple of “Popular in your network” emails from Twitter, so it doesn’t appear to be a widespread issue. The other bug is to do with the calendar view in the dashboard. For some reason, the time when the next event starts is cut off, as seen in the image at the beginning of this post.

Minor quirks aside, Blend is a very powerful tool for BlackBerry users, and I encourage anyone with a Passport to give it a try. Remember that mobile computing vision Thorsten Heins went on about in the early days of BlackBerry 10? This feels like a step in that direction. Could Blend do more? Absolutely. But this is just the beginning, and I’m curious to see where BlackBerry is going to take Blend from here.