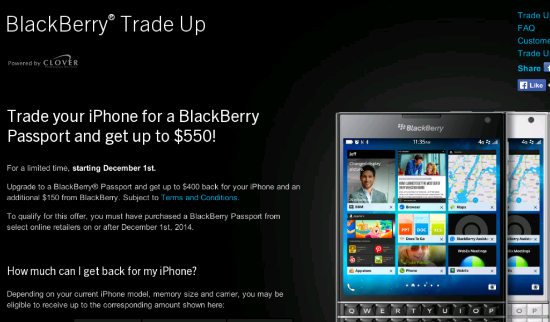 With the holidays fast approaching BlackBerry has decided to join in on the pre-holiday deals with a BlackBerry Passport Trade-Up Program. This program starts December 1st and it allows Apple iPhone users to upgrade to a BlackBerry Passport while getting up to $400 back on their iPhone, plus an additional $150 from BlackBerry. This is a limited time offer so you must act between December 1, 2014 to February 13, 2015 and is available in North America only. Current qualifying iPhone models include the iPhone 4S, 5, 5C, 5S and 6.

WATERLOO, ONTARIO, Nov 24, 2014 (Marketwired via COMTEX) — BlackBerry Limited BBRY, +1.66% (BB), a global leader in mobile communications, today introduced a host of holiday offers, making it easy and more affordable for customers to purchase new BlackBerry(R) smartphones for the holidays.
Just in time for the holidays, BlackBerry will be offering limited time incentives, including:

The BlackBerry Passport Trade-Up program runs from December 1, 2014 to February 13, 2015 and is available in North America only. Current qualifying iPhone models include the iPhone 4S, 5, 5C, 5S, and 6. For additional information on this program and to get an estimate of your current iPhone’s value, go to tradeup.blackberry.com.

With BlackBerry’s new financing options from PayPal Credit, U.S. customers can now purchase unlocked devices and accessories without taking an immediate hit to their bank accounts or holiday funds. For any purchases over $200 USD, customers can purchase through PayPal and choose to pay off their balance in full by the payment due date that is on their statements, or pay in six installments over six months.(ii)

(i) Eligible customers will receive amounts back via a Visa(TM) Prepaid Card to be sent by mail following receipt of a qualifying Apple iPhone and a valid proof of purchase of a BlackBerry Passport. The promotional value is based upon the condition and model of the Apple iPhone traded in. New BlackBerry Passports must be purchased on or from ShopBlackBerry.com or purchased from, shipped from and sold by Amazon.com after December 1, 2014 to qualify for the BlackBerry Passport Trade-Up program. Additional terms, conditions and limitations apply. Program Terms can be viewed at tradeup.blackberry.com.

(ii) Customers who do not make all payments by the end of six months will be charged the accumulated interest from the date purchased to the date that payments have been completed. The interest rate is 19.99 percent. PayPal Credit cannot be used for pre-orders. For more details on this offer, go to:https://www.securecheckout.billmelater.com/paycapture-content/fetch?hash=8PU3236M&content=/bmlweb/np90drollingiw.html#faqsection