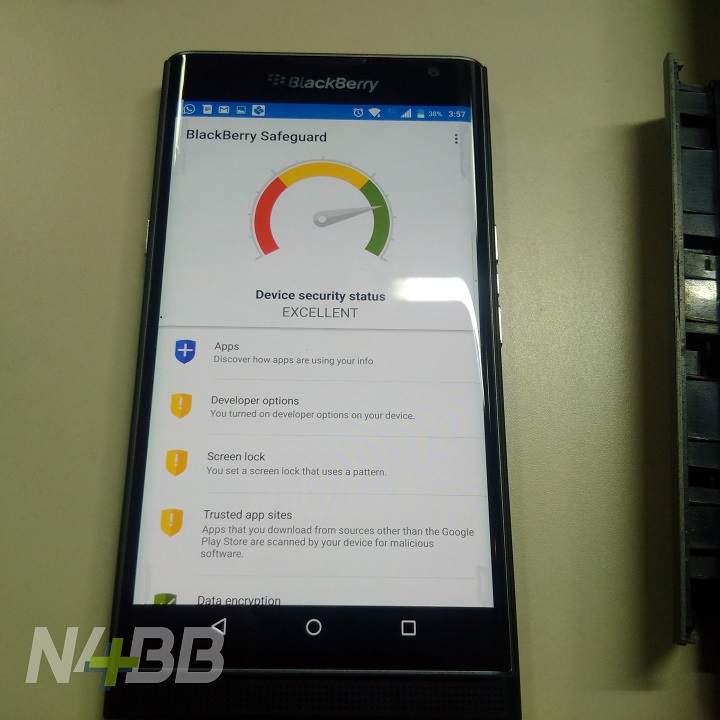 The BlackBerry Priv has shown up in yet another leak from N4BB, giving us more hints as to what’s under the hood of BlackBerry’s first Android device.

The leaked photos include an AnTuTu Benchmark detecting the Priv as a 64-bit device, providing credence to rumours of a Snapdragon 808 CPU powering the phone. One of the photos also confirms that the Priv can shoot 4K video at 30 FPS, in addition to 1080p at 30/60 FPS, and 720p at 30/60 FPS. The rear camera, as seen in prior leaks, is an 18-megapixel unit with Schneider-Kreuznach optics.

The latest leak also gives us a glimpse of what the curved screen might be used for, with a battery indicator appearing on the right edge when the phone is plugged in to charge. This suggests that the device will be using an OLED display, as pulling off a similar indicator on an LCD panel would likely be inefficient.

One of the photos gives us our first glimpse at BlackBerry Safeguard as well. It appears that this app will report the device’s “security status” to the user by monitoring developer options, the screen lock, data encryption, and possibly others. It can also scan apps for malware when they are downloaded from anywhere other than Google Play.

Although Safeguard allows you to view app permissions, it is still unknown if there will be any way to modify these permissions. The device is rumoured to be launching with Android 5.1.1, which does not natively support modifying permissions. An update to Android 6.0 would address this.

The BlackBerry Priv is expected to launch in November. Are you liking what you see so far? Sound off in the comments below!