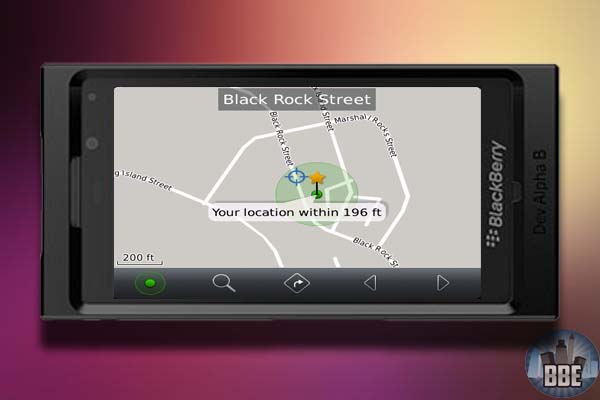 Following the constant feature releases by RIM on the upcoming BlackBerry 10 operating system, I can’t help but feel that little attention was given to the native BlackBerry maps application. Quite a number of BlackBerry users will concur that the maps application is one of the most important apps on our smartphones and I’m here to propose functionality I would very much like to see in the BlackBerry 10 Maps app.

Our BBM pin is our identity, and BBM is the platform where we connect with users who share a similar identity with us. Because of the exclusivity of the BBM pin, your BBM contacts become like family and strangers holding a BlackBerry in public instantly become friends. In everything we do with our BlackBerry smartphones its mostly these people we want to connect and share with and my proposed functionality will focus entirely on BBM integration.

Many features I would want to see in the maps app are supplemented by third party apps, but having them rolled up into our native app would make THE perfect BlackBerry maps experience.

Imagine being able to check-in to a location on BlackBerry Maps using your BlackBerry pin. The maps app will include a separate tab that will allow you to view your check-in history and that of your BBM contacts, including commenting, attached photos and allowing your contacts to share your check-ins on their own activity feeds with their contacts.

But ofcourse I have taken into account the fact that we often change/upgrade our smartphones but would still want to keep our check-in data. Signing in to the maps app for this functionality will be done using your BlackBerry ID which will inturn use your current pin in your activity and also update all previous check-in data to match your current pin if you change your phone.

In maps discovery I imagine requesting the maps app to show you your current location and it also shows you on the map BlackBerry users within a let’s say a 500m radius of your location, with the option of instantly sending them BBM requests and what might have been a lonely visit to the park becomes a fun gathering with fellow BlackBerry users.

Imagine you are supposed to meet up with a friend and you are delayed, or the taxi took a detour and your friend has become a bit impatient. BlackBerry Maps comes to your rescue, you simply send a live location feed to you friend via BBM, who then opens it in their maps app and they get live data of your current location including speed, so they know exactly how far you are from them and how fast you are getting to them or to wherever you may be going.

In a world of smartphones, BlackBerry 10 will usher in the era of superphones. With such a great evolution in mobile experience, I believe no detail should be left unrefined. BlackBerry prides itself in connectivity and seamless app integration and this here is just my expectation of what should come with the BB10 OS. My idea is a bit rough, but the lab at RIM can turn it into a polished reality, of that I’m sure.

Drop some comments and tell me what you think, or what you would want added to your maps experience.