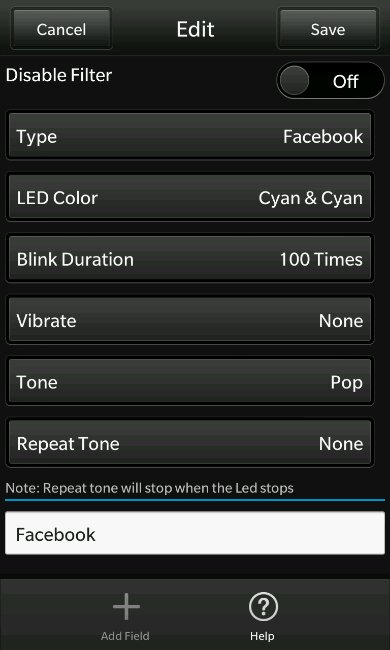 Here’s some great news for all you folks that use an app to control your LED’s for incoming messages. The developer from Toysoft Development has just released the first LED headless mode app called Color LED for BlackBerry 10 devices. That’s right folks it is a truly long running headless LED app that can control almost all of your incoming messages LED’s and ringtones. That means no more active frame or having to remember to launch the app after a reboot.

Just so you know I have had the privilege of having Color LED on my device for a couple days now and it is running exactly the way it’s designed to and setting it up was very easy. In fact I wanted to point out one of the features of Color LED that I’m sure many of you will be happy to see, it has an LED for the cellular network. Folks this means you can now have that green (or some other color) LED to show that your device is still connected to the service provider like the days of old.

Please remember you will need OS 10.2 or higher for the headless features to work.

*BBM and WhatsUp are not supported because there are no API to access the messages yet.

This has by far been the one app myself and I’m sure many of you have been waiting to be released. To grab Color LED just head on over to BlackBerry World and download it now, it’s only $2.99 (and let me say well worth every penny). Danny from Toysoft will be keeping an eye on this post so if you have any comments, questions, or suggestions hit up our BlackBerry Empire forum and let him know.