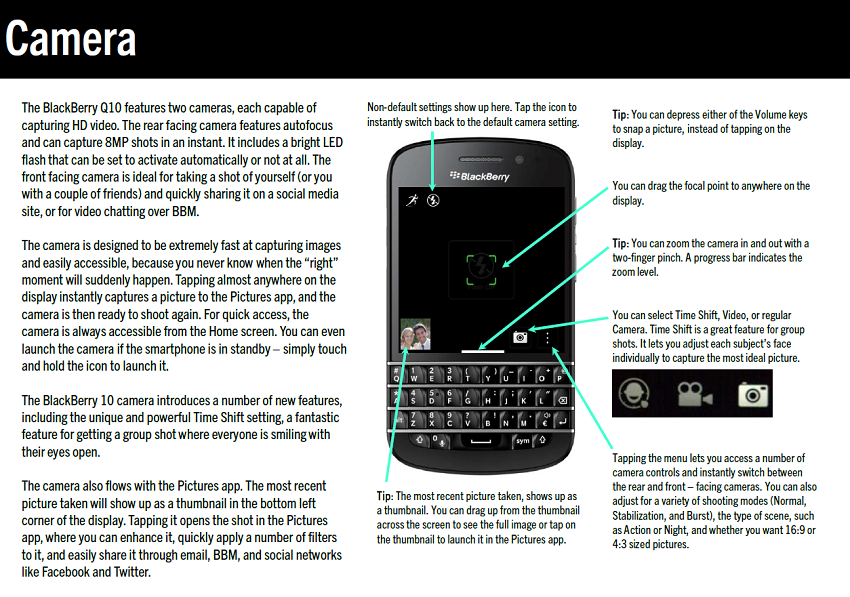 The BlackBerry Q10 with physical QWERTY keyboard has arrived, BlackBerry delivers once again showing the smartphone industry they make the best keyboard experience. BlackBerry Empire goes hands on with the device and analyzes every aspect including hardware and software. Yes, we LOVE the BlackBerry Q10.

Quick overview: Main updates are to support the physical keyboard and display on the BlackBerry Q10 (from BlackBerry Z10). There are also enhancements (BlackBerry 10.1) for the Hub, Camera, Phone, Calendar and Notifications, as well as support for additional IT policies and controls for customers connected to BlackBerry Enterprise Service 10.

The BlackBerry Q10 is far beyond the standard in hardware and is designed with superior materials. When picking up the device you can instantly feel the Q10 is a strong, durable phone. If you’re like me and always on the go your device is more likely to suffer incidental drops, scuffs and wear. The Q10 is built around a forged 304 stainless steel compounded to consume  ample usage. BlackBerry decided to switch from the chrome bezel to a Black PVD finish which will keep from scratching.

The frets on the keyboard are also made of stainless steel which should also be scratch resistant. When holding the device or typing on it it feels very comfortable in the hand also in part to the back of the device.  Unlike any other BlackBerry to date the entire back of the Q10 glass-woven for optimized signal and NFC strength. The glass weave is wrapped in soft touch coating giving a nice comfort stick while in your hands. There is a stainless steel fret across the back of the device which has been raised enough to protect the device from rubbing on surfaces.

Comparing to the BlackBerry Z10, you get a physical power button on top of the device and your standard 3.5mm input jack.  Use this jack as headphones for device or plug in your wired headset for hands free calling. I like how BlackBerry has decided to put the headset jack on top of the device rather on the side. It makes sense when the device is in your pocket having the headphone jack on top. It minimizes wear on both the device jack and your headphone cable. Your Micro USB and HDMI connecting ports are located on the left side of the device.  The HDMI port allows you to extend your display to the big screen which allows you privately view your screen display on a large monitor or publicly display your screen for work or school. You can find your upper, lower volume control keys and center key to the right of the device.  The camera key has been eliminated as it is now a virtual soft key on the homescreen of the Q10.

The engine powering both the Z10 and Q10 is a Dual Core 1.5 GHz Processor which runs strong and silent, The device packs 2 GB of RAM and 16 GB flash memory double of the last flagship Bold 9900. It offers up to 64GB of hot swappable memory with a Micro SD slot. With heavy use the Q10 does not overheat or lag at all. Nor does the Z10 for that matter but the Z10 tends to feel a bit warmer than t he Q10 with heavy use. Overall this engine is a silent sleeper.

The BlackBerry Q10 will come with BlackBerry 10.1 pre-installed, unlike the BlackBerry Z10 which received the 10.1 update during BlackBerry Live last month (unless you live in the U.S.). There are several enhancements to the BlackBerry 10.1 OS one being the addition of HDR which stands for High-Dynamic-Range imaging. HDR is a set of methods used in imaging and photography to capture a greater dynamic range between the lightest and darkest areas of an image than current standard digital imaging methods or photographic methods. HDR images can represent more accurately the range of intensity levels found in real scenes, from direct sunlight to faint starlight, and is often captured by way of a plurality of differently exposed pictures of the same subject matter.

Besides the HDR addition, tons of enhancements were made to the BlackBerry 10.1 OS, you can see the full list of changes from 10.0 to 10.1 here.

One more note regarding additions to the 10.1 software, BlackBerry has brought back the BBM “Broadcast All” option that is in BlackBerry legacy devices, however it seems like they just added it without any work to it, the broadcast feature now sends to ALL your contacts on your phone, that is something I do not like. BlackBerry legacy device broadcast feature lets you select ALL OR select all from a category, something that is much more efficient.

As far as the mini-app gap goes, which BlackBerry has quickly filled with quality apps in BlackBerry World comes the OS as a whole. The BlackBerry 10.1 OS is what makes the Q10 special, as a whole people want an OS that is solid, polished, effective, the BlackBerry Q10 has just that. E-mail, messaging, typing is at is finest that is what makes a smartphone a smartphone, having the ability to communicate at ease.

The cherry on top has to be the keyboard. After using the BlackBerry Z10 for over 3 months assimilating to the all touch virtual keyboard the time came to switch back to the faithful QWERTY keyboard. From the time I switched to the BlackBerry Z10 I completely put away the keyboard and when I picked up the BlackBerry Q10, the feeling wasn’t as ancient as I thought. Thanks to its near perfect design I was flying through BBM chats, emails and phone navigation using legacy keyboard shortcuts fluidly. If you want to know what’s the same you’ll be pleased with its 35 key QWERTY keyboard with a full space bar, delete and enter key that we’ve been accustomed to. The alt and shift keys work the same and most of your keyboard shortcuts on the legacy OS have been added to the Q10 with the debut of BlackBerry OS 10.1.

What’s different are a few modifications – for the better. One of the more notable changes in the keyboard is the key placement and alignment of the overall keyboard. The famous steel frets remain, this time with an additional layer right under the screen. The frets have been designed horizontally straight and have done away with the contoured frown layout. The keyboard frets are thicker and run hanging off the edge giving you more room for accurate keystrokes. The overall keyboard is wider as well accommodating the larger screen display making this the best physical keyboard on a smartphone ever produced.

Considering the specs listed above the BlackBerry Q10 comes with a 3.1″, SuperAMOLED screen display at 720×720 resolution. One of the first things we’re hearing at the macro is that the screen doesn’t look the same, or as vibrant as the Z10 or other devices. Simple answer, the Q10 does not come with your traditional LCD screen, BlackBerry decided to go with the Super AMOLED display making it one of the first Berry’s on the market with an AMOLED display. If you’re wondering what the heck an AMOLED (Active Matrix Organic Light Emitting Diode) display is, it actually isn’t as complicated as it sounds and offers great incentives such as the ability to produce a thin screen layer using less backlight thus conserving power and ultimately, preserving battery life. While AMOLED technologically isn’t new, its a logical move in addition to a very crisp display resolution at 720×720,  356 DPI.

The Q10’s iconic design allows for great one handed use. If you’re in the middle of multitasking and find yourself using the Q10 one handed with the device away from under your nose you should have no problem seeing the display unless you suffer from high visual impairment. At 3.1, it is a fair upgrade from the previous at below 3″ and due to the AMOLED display and resolution, it  isn’t harsh on the eyes in darker lit areas. Personally, I’ve lowered my screen display on my Z10 which uses an LCD display screen to about 45% brightness because I find the real bright screen annoying and distracting at night. I have the brightness level on my Q10 at about 65% which isn’t distracting so make sure to toggle with it at your preference. Overall, it’s great to use in the office, classroom, conference room or outdoors with its vivid AMOLED display.

BlackBerry really stepped it up a couple of notches with BlackBerry 10 but one area that has been significantly upgraded has been the camera.  First off, the Z10 and Q10 have the EXACT same camera specs although there are slight differences in the software with BB10 and BB10.1. Both the Z10 and Q10 come equipped with 2 cameras, rear and front facing – the first Berries with dual cameras.

The rear camera is at 8 megapixels sporting auto-focus, flash, image stabilization, continuous and touch to focus. It enhances at a (5x) digital zoom and is a real beauty to use. The new camera supports full 1080p HD recording so  for those who video record, no need to spend extra money on a fancy camera as the Q10 records in full 1080p. In addition to the auto-focus and 1080p HD video recording we were introduced to a feature never seen in any BlackBerry or in-market smartphone for that matter – Time Shift mode.

Time Shift on BlackBerry 10 allows you to adjust individual frames of a photo snapped for precise accuracy. For example, lets say on your family vacation you ask a fellow tourist to take a photo of the entire family. Mom comes out blinking, Dad comes out with half a grin and little Joey has his eyes closed. Time Shift mode allows you to manually find that picture perfect frame creating a beautiful memory of that vacation to Disney World. Keep in mind, Time Shift is a mode which needs to be activated in order to function.

Both cameras in the Q10 allow for quad shooting modes – Normal, Stabilization, Burst and HDR which is new to OS 10.1. Choose between 5 scenes to get that perfect picture – Auto, Action, Whiteboard, Night and Beach/Snow. All in all, the camera in BlackBerry 10 is a huge upgrade from the previous and is fiercely competitive with other in-market smartphone cameras.

BlackBerry Q10 in the news and helpful links:

If you feel there was a section on the BlackBerry Q10 that we did not discuss or you want to know more about drop a comment below and we will gladly add it to our review. Kudos to Kris for assisting in compiling a thorough review.