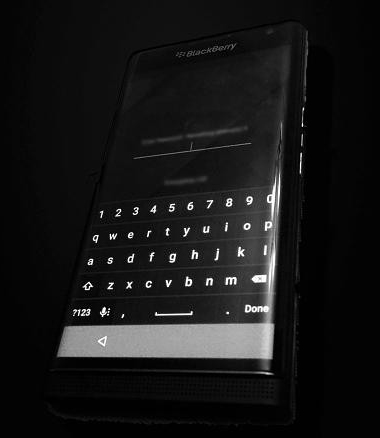 Not too long ago, we’ve seen a render of the BlackBerry Venice slider smartphone and earlier this month a poor quality photo of the smartphone emerged online. It seems as though that was not the end of the leaks as another photo has surfaced online of the upcoming BlackBerry handset even though it isn’t the best quality photo around.

The photo above shows you a blurry photo of the BlackBerry Venice with its background edited out.

BlackBerry has not officially announced much details about the device as of yet, however, rumors suggest that it might be possible to run the Android mobile operating system on the device. The smartphone will most likely run on the BlackBerry 10 OS out of the box though.

As you can see from the leaked photo above, it shows the on-screen keyboard. If you look a little closer, you’ll notice that its back button has a little extra space compared to keyboards found in older devices. Some seem to believe it looks like Android’s on-screen keyboard.