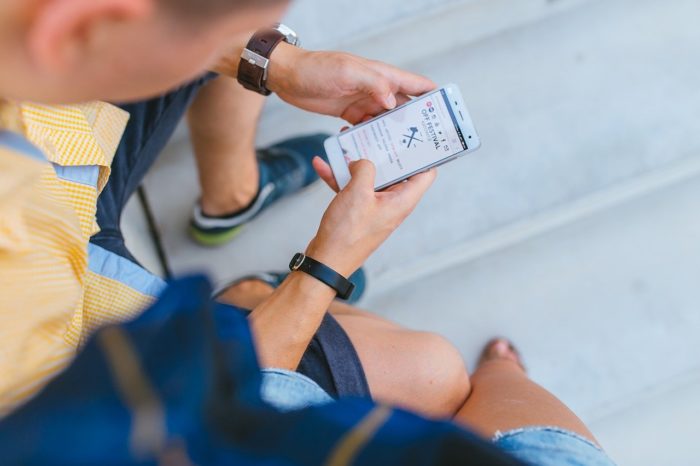 It’s a cliche at this point to bemoan the kids and their faces in their phones—partially because it’s not just the kids anymore. Say what you will about a family or a group of friends around the dinner table with every pair of eyes on a phone screen, smartphones are here to stay. The occasional dissident with a flip phone looks more and more like a cook—and more and more likely to be the recipient of “Text Message Not Delivered.”

With the rise of smartphones has come a host of changes in how we conduct our daily life—how we schedule appointments, find our destinations, shop, browse the internet, get from Point A to Point B.

More exciting, however, are the changes smartphones have ushered into the delivery of healthcare to consumers and the changes in smartphone healthcare applications on the horizon. Maybe it was on the mind of the creators of the Blackberry and the iPhone, maybe it wasn’t, but smartphones are transforming healthcare. Here are three ways in which this is happening.

One of the key benefits of smartphones is how they made the world smaller. With the right apps, you could assemble a whole work and social apparatus on your phone, allowing you to stay in touch with friends and colleagues, as well as conduct business, on an ever-expanding footprint of the world with access to mobile internet data.

“Telehealth” or “telemedicine” takes mobile-friendly concepts—email, eConferences, eCommerce, face-to-face video chat—into the digital world. Telehealth applies to personal computers and tablets as well as smartphones, but all of these functions are well-suited to smartphones. With almost three quarters of all web browsing taking place on a mobile device, smartphone use will play a major role in the telehealth revolution.

The concept of telehealth is simple—what if you didn’t have to go to the clinic or the hospital or the pharmacy for basic medical needs, the same way you don’t have to drive to Target to buy socks anymore or fly to Japan to conference with a foreign supplier?

What if you didn’t have to sit in a waiting room full of sick people while you fill out a form, but instead could fill out that form online from the comfort of your home and minutes later be in chat support or face-to-face on a teleconference with a doctor? A psychiatrist or therapist? A nurse practitioner? A pharmacist? What if your drugs could be mailed to you like a package from Amazon, wherever you are in the world?

Telehealth makes all of these possibilities a reality. We’re seeing it more and more—patients with diabetes, heart disease, cancer, mental illness, etc. able to have more follow-up appointments and access to their healthcare providers, especially in an emergency.

Do people even use their smartphone as a phone anymore? Other than the domination of voice calls by SMS or other text-messaging protocols, the meat of the smartphone revolution has been the apps. An app to do everything, an app for every business you patronize, games, social networks, tools, baubles like an animation of a cigarette lighter to hold up as concerts. People love filling their phones with apps, and software developers have scrambled to meet that demand.

Apps are especially likely to succeed if they are useful, and what’s more useful than safeguarding health and wellbeing? A key class of app just making itself known goes by the abbreviation “SaMD”—software as a medical device.

Orthogonal notes that SaMD is different from “SiMD”—software in a medical device. After all, software controls a robot that performs heart surgery, but that software won’t do much good dropped into a smartphone—so far, smartphones can’t perform heart surgery (though you know someone in Cupertino has to be working on it).

SaMD, by contrast, can be dropped into a smartphone and perform important functions, due to useful features already contained inside smartphones.

For example, smartphones contain microphones (it’s how the person you call can hear your voice). A SaMD app designed to monitor cardiopulmonary conditions could use the microphone to listen for irregular breathing and alert the patient or his doctor of a developing problem, possibly in time to save a life.

Many smartphones also contain tri-axial accelerometers, which tell the phone’s software if it is accelerating and how it is oriented. It’s why your phone might “wake up” when you pick it up or take it out of your pocket. SaMD apps that monitor motor conditions like Parkinson’s Disease use the tri-axial accelerometer to detect tremors and record that data.

All smartphones come equipped with wireless technologies like WiFi, Bluetooth, and cellular data roaming, which allow SaMD apps to communicate with wearable or implanted technologies like ECGs, blood-glucose monitors, or brain EEG monitors, recording continuous data and uploading it to the cloud for physician review and early detection of crises.

The data recorded by smartphone SaMD and uploaded to the cloud portends a revolution in medical diagnostics and precision medical care. It also represents a key component of telehealth, bringing the doctor’s office to you rather than requiring you to go to the doctor’s office.

Before smartphones, patients would usually only note their heart rate, blood pressure, and other vital statistics when they visited the doctor’s office. If something happened between visits, the patient’s doctor might never even know about it.

Cloud-connected biometric data affords doctors a wealth of data from which to build diagnoses and treatment plans. It would almost be too much data if it weren’t for AI software capable of scanning that data for anomalies and red flags, often in minutes.

Love them or hate them, the smartphone era is an exciting time to be alive. With major contributions to healthcare, smartphones stand to make those lives longer and higher-quality. Chalk up a point for team “Love Them.”