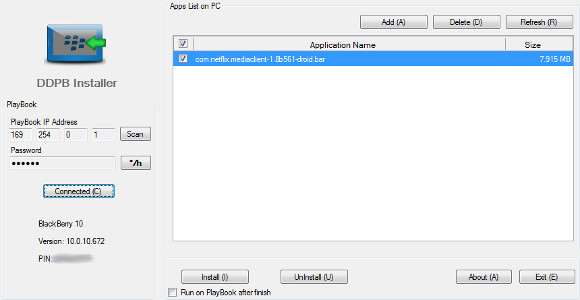 Although BlackBerry World has quite a few great apps, sometimes we just want more – enter Android Player. This Android runtime within BlackBerry 10 can run certain Android apps, and to make the most of it, you should learn how to sideload! We’ve already featured a tutorial for the process using PlayBook App Manager on Google Chrome, but for those of you who don’t wish to use Chrome, here’s another tutorial using the DDPB Installer. (Note: DDPB is only available for PC at the moment, sorry Mac users!)

Note: If you are running OS 10.2.1 and higher we suggest you follow this guide.

For those unfamiliar with the term, sideloading is the process of bringing over an app to a BlackBerry 10 device (or the PlayBook) that isn’t featured in the app store. It’s most-commonly associated with Android apps, but strictly-speaking, you can sideload native BlackBerry apps as well, which is useful if they’re not available in BlackBerry World for whatever reason (i.e. a beta app that has not been submitted to BlackBerry World). This is really useful for Android apps that developers have not brought over to BlackBerry World, but keep in mind that not all Android apps are guaranteed to work – you can forget anything that requires an Android version above 2.3, as Android Player currently runs 2.3.3.

You’re going to need the following to sideload apps using this tutorial:

So, you’ve got DDPB installed and working, a .BAR file or three ready to go, and your device hooked up to your PC. Then let’s start by preparing your device for sideloading! You’ll need to enable Development Mode for this. So, go into Settings, and find the Security and Privacy menu, highlighted above.

From there, select Development Mode at the bottom.

With Development Mode enabled, your device is ready for sideloading. Let’s fire up DDPB – this is where you need that IP address and password I mentioned. On the left side of the window, you’ll see a “PlayBook IP Address” and “Password” field. Enter the device’s Development IP Address in the first field, and (rather obviously) the password in the second field. If, for whatever reason, you don’t have the Development IP Address at this point and can’t be bothered to go back into the menu, pressing “Scan” might find it, but I still recommend entering it manually. With the info entered, press “Connect”. If your OS version and PIN show up under the button, you’ve done everything correctly so far.

Now we need to specify the .BAR file we want to sideload. Press the “Add” button under “Apps List on PC”, navigate to the directory containing the app, select the file, and press “Open”. You can also select multiple .BAR files in one go if you’re sideloading more than one app. For the purposes of this tutorial, I will be sideloading the Netflix .BAR file released yesterday. (Note: I should mention that it’s technically possible to double-click on a .BAR file and open DDPB like that, with the app already selected, but this has been known to produce some bugs, so I’m avoiding it in the tutorial).

With that done, the app should appear in the list in DDPB. We’re finally ready to begin actual sideloading! Click on the checkbox next to the app you want to install (if you’re installing multiple apps, you can check off all of them using the checkbox at the very top), and press “Install”. A pop-up will show you how far it’s progressed – give it a few minutes, maybe several minutes if you’re sideloading multiple apps. Once it’s done, another pop-up will alert you to the fact.

That’s it! At this point, you can shut off DDPB, unplug your device, disable development mode, and remove the device’s password lock if you’d like. Now you can enjoy sideloaded apps such as Netflix, Instagram, or 4 Pics 1 Word on your BlackBerry 10 device! Be advised that apps ported from Android, especially in this manner, may not run anywhere near as smoothly as a native BlackBerry 10 app. Some may be buggy, and as I mentioned at the beginning, some of them may not work at all. Such is the nature of sideloading Android apps – these apps were not designed to work on BlackBerry 10. To help you out, there’s a list of .BAR files that have been confirmed to work on the forums here. Happy sideloading folks!