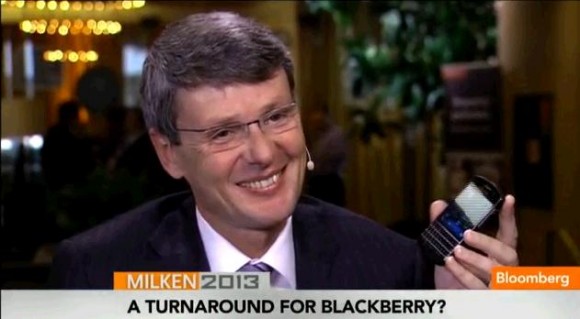 Thorsten Heins says the tablet industry will come to an end in approximately 5 years (2018), if you saw his video interview with Bloomberg yesterday. Heins states tablets are “simply not a good business”.

However according to Antonio Costa, an investor in the stock market says that the BlackBerry CEO will give an update on tablets at BlackBerry Live which is two weeks away.

“In five years I don’t think there’ll be a reason to have a tablet anymore,” Heins said in an interview yesterday at the Milken Institute conference in Los Angeles. “Maybe a big screen in your workspace, but not a tablet as such. Tablets themselves are not a good business model. – Bloomberg

Right now it is all up in the air, could Thorsten Heins put an end to producing future tablets? The BlackBerry PlayBook tablet is still scheduled to receive the BlackBerry 10 OS by the end of the calendar year. There is also a very much rumored BlackBerry 10-inch tablet, I guess we will wait and see if an update is made at BlackBerry Live 2013.