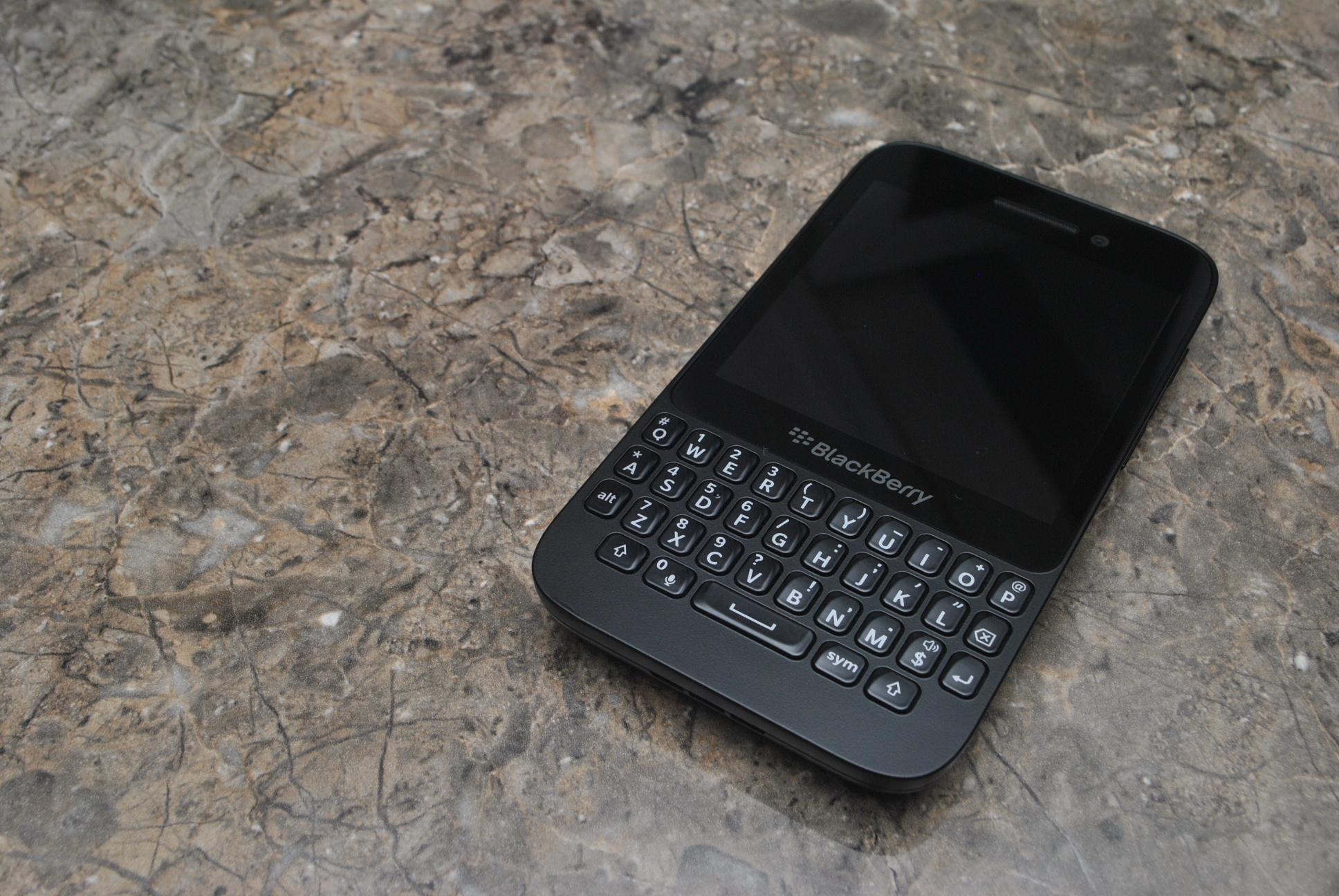 When BlackBerry 10 first launched, we were presented with two high-end models – the blackberry Z10, full-touch Z10 and the keyboard-wielding Q10. These were designed to be the cream of the crop, but unfortunately they were a little expensive for some consumers – enter the Q5. This is the third BlackBerry 10 handset, and currently the cheapest point-of-entry for the new OS. But does the lower price make it a bad product? That’s the question I set out to answer when I received the phone for review. Ready for our blackberry Q5 review?

When I first unpackaged the Q5, I was greeted by a surprisingly attractive device – the photos don’t do the Q5 any justice, it looks great. My review unit came in black, but it’s also available in red, white, and pink, depending on what market you’re in. Here in Canada, black and red are the only options, with the latter currently exclusive to Virgin Mobile.

Before I continue discussing the device itself, I have a few quick notes about the other contents of the box. The Q5 comes with a fairly standard set of kit – USB cable, wall charger, headphones, safety information and a quick start guide. The headphones are the same ones that came with the Z10. They’re of fairly decent quality, but audiophiles will want to invest in an aftermarket set. Interestingly, the wall charger included with the Q5 is actually slightly faster than the one included with the Z10 or Q10 – while the high-end devices come with a 750 mA charger, the Q5 ships with an 850 mA unit. The only disappointment in the box was the USB cable – with a length of 0.9 metres, it was a little too short for my liking.

Back on the Q5 itself, anyone coming from another BlackBerry, even a BlackBerry 10 device, will notice quite a few things. For starters, this is the first BlackBerry phone to feature a non-removable battery – more on that a little later. As a result, it has a special door on the left-hand side for your microSIM and microSD card. You’ll find a microUSB plug right above this door, but unlike other BlackBerry 10 devices, there’s no microHDMI present. On the right-hand side, the Q5 has volume up, down and mute buttons in the same layout as the Z10/Q10, but made out of plastic rather than steel. The lock button at the top of the phone is also plastic. It provides a little less feedback than the lock button on the Z10/Q10, but you grow accustomed to it quickly.

The body of the Q5 is made exclusively of plastic. The appearance seems to suggest that it’ll be difficult to grip, but I had no such difficulties myself. Though it may not feel quite as good as a high-end device such as the Q10, it never felt truly cheap – in fact it’s a rather nice device to hold.

As a mid-tier device, you’d expect the Q5’s spec sheet to be subpar next to the Q10 or Z10. To some extent, you’d be right. The biggest cutback, I feel, is the 5MP rear-facing camera, which I’ll discuss a little later. Another major cutback was the internal storage – with just 8GB, you won’t have much room for very large games or apps. Luckily, the microSD slot supports up to 32GB of storage, so you can keep your media out of the internal storage for more app space (A 64GB card might work – it certainly does on the Z10/Q10. But BlackBerry’s official rating for all BlackBerry 10 devices is 32GB).

Otherwise, however, the Q5’s specs are actually pretty respectable – the same 2GB of RAM seen on other BlackBerry 10 devices, a slightly-slower 1.2GHz dual-core CPU, an identical 2MP front-facing camera, WiFi b/g/n (not dual-band, unfortunately), Bluetooth 4.0, NFC (market-dependant), GPS with A-GPS, and the same array of sensors as its more-expensive counterparts. It even retains 4G LTE, and can always fall back onto HSPA+, 3G, or EDGE. All of them are quad-band, which should prove useful if you travel abroad often.

The screen on the Q5 is similar to the Q10’s – both rock 3.1-inch, 720×720 displays with a pixel density of 329 pixels per inch. The only difference is that the Q10 is OLED, while the Q5 is LCD. The latter consumes more battery power, allowing slightly better battery life on the Q10. The screen is quite vivid and very sharp, but it’s not ideal if you watch a lot of videos – with a 1:1 aspect ratio, nearly all of your videos will be letterboxed on a screen that isn’t very big to start with.

Put all the pieces together, and the OS experience itself doesn’t feel at all compromised compared to the top-tier devices. Everything is just as smooth, with all of the same features present, so I won’t delve too much further into what the OS is like. For reference, however, my unit was running the 10.1 Maintenance Release.

The Q5’s battery is the largest one fitted to a BlackBerry phone so far – 2180 mAh. That’s 80 mAh larger than the Q10, though the LCD screen puts its official battery life ratings a little behind that of the Q10. Compared to the Z10, however, BlackBerry claims an extra day of standby time and an extra two and a half hours of talk time on 3G.

In the real world, that’s easy to believe. The Q5’s battery life was nothing short of excellent. One day, I managed 15 hours of moderate-to-heavy use with 17% battery remaining, all with LTE enabled and screen brightness nearly at maximum. In fairness, “moderate-to-heavy use” is a pretty generic term, so your mileage may vary, but I never at any point felt troubled by the battery life. I carried around my Z10 battery bundle out of habit, which I could always plug into the microUSB port to charge up, but I never had to. If you’re a light user, I’d wager you could go two days on a single charge.

As I mentioned earlier, the Q5 is the first BlackBerry phone to feature a non-removable battery. This seemed to scare off many users, but frankly I never found this to be a problem. With excellent battery life and a stable OS, I never felt the need to swap batteries or pull it to reboot. Even if everything seizes and you can’t reboot from the OS  (something which has never happened in my experience with BlackBerry 10), holding down the volume up and down buttons at the same time will eventually force the phone to reboot.

Why of course, you can’t have a BlackBerry review without touching upon the keyboard! The Q5 features a chiclet-style physical keyboard, reminiscent of old Curve devices. The keys are quite large and all backlit. Combined with the curved sides of the device, this makes for some very comfortable typing.

The OS has some nifty features to compliment the physical keyboard – Q10 users will be familiar with these. Many apps support keyboard shortcuts, and you can search for anything straight from the home screen by just beginning to type – it brings up the Search app automatically and inputs your query. The Search app also has Instant Actions, so you can type an action instead of an app. With Instant Actions, you can compose messages, update your Facebook status, compose a tweet, and more without having to go into the app itself first. Combined with a physical keyboard, it’s a very powerful feature I found myself enjoying.

My only complaint? The keyboard is a bit loud. It’s not something unpleasant per se, but if you’re in a quiet environment you’re definitely going to notice the clicking of the keyboard – most of the physical keyboards I’ve used in the past were quieter than this.

The camera, as I said earlier, is one of the Q5’s weak points. I’ll start with the good news, however – the front-facing camera is the same 2MP unit you find on the Q10/Z10, so your duck-faced selfies will be just as good as on the high-end devices.

Unfortunately, the 5MP rear-facing unit is a downgrade. Combined with what must have been a cheaper lens, the Q5’s camera quality isn’t all that great. Now, it’s definitely far from the worst smartphone camera there is, and it still has support for 1080p video, but it does have a few problems. In darker environments, the image tends to get very noisy and blurry. You can, of course, use the flash, but it’s usually quite harsh. On the bright side, the shutter speed is pretty fast.

In testing, I found that colours on the Q5’s camera were rather exaggerated compared to the Z10. In some cases, this wasn’t a bad thing – indoors for instance, the Q5 produces more vivid photographs, so long as you don’t have to use the flash. But when you’re taking photos outdoors on a bright day, the colours often feel overdone.

Ultimately, if you’re casual with your camera usage, the Q5 will get the job done. But don’t except any miracles from this camera.

Now this isn’t something BlackBerry can do too much about, but I have to make a brief comment about third-party apps on the Q5 (as well as the Q10). Some of the developers seem to have taken the lazy approach to converting apps from the Z10 to the Q5/10 by ‘squishing’ splash screens instead of cropping and/or resizing them appropriately. To these developers I say – please, set aside some time and change it appropriately. It’s a small change that makes a big difference. Squished images just look seriously awkward.

Otherwise, however, BlackBerry’s been doing their best to bring apps over to BlackBerry 10, and like the Q10 which it shares its screen resolution with, the Q5 has support for pretty much all of the big names available in BlackBerry World. Songza, Skype, Endomondo, Angry Birds, WhatsApp, and plenty more are all there. The app situation on the platform isn’t the best, but it’s getting better with time, and the Q5 hasn’t been left out.

Despite all of the additional functions found on the Q5, chances are you’ll still be using it to make phone calls like any other smartphone. Luckily, the Q5 manages that very well. Any calls I made or received came through very clearly on my end, with no complaints about quality on the other end either. The Q5 even supports HD Voice, just like the Z10/Q10. Call quality can be very network-dependant however, so your results may vary.

Coming from the flagship experience of the Z10, I wasn’t sure what to expect from the Q5. I love BlackBerry 10 as an OS, but I was worried the cost-cutting measures would ruin it for me. Luckily, BlackBerry seems to have played their cards just right.

Sure, the Q5 has its drawbacks. The camera is lackluster, the screen is far from ideal for videos, and the app situation is still a work in progress. But at the end of the day, it all boiled down to this – the Q5 felt no worse than the flagship devices 80-percent of the time, while costing as much as 50-percent less (Koodo in Canada sells the Q5 for $350 no-term, parent company Telus sells the Q10 for $700 no-term). It was a device that I could pick up every morning without being reminded of its price. If you want the BlackBerry 10 experience without the flagship price tag, the Q5 absolutely delivers. We hope you enjoyed the blackberry Q5 review. If you have one, tell us about it in the comments below.