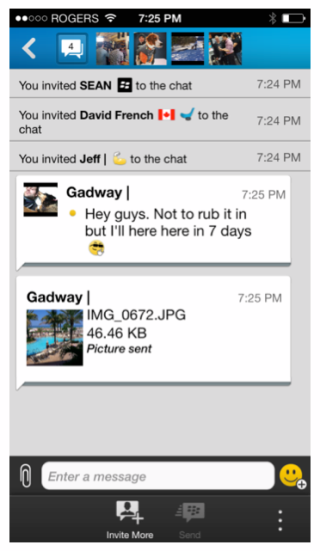 Safe to say the BBM team has heard user feedback and has responded as BBM’s new file transfer limit will be upped to 16MB, we reported on this yesterday but now we have a definite number. Finally as you can see from the image above  the next release of BBM will support photo sharing in multi person chats.

See the full announcement from Jeff Gadway, head of product and brand marketing for BBM below:

Over the last couple of weeks there’s been a lot of news coming out of the BBM team at BlackBerry. Earlier this week we introduced you to the eBBM Suite and BBM Protected, as well as announced that BBM would be coming to Windows Phone and Nokia X. Last week we shared that stickers would be coming to BBM in the new BBM Shop. Now we want to tell you a bit more about some of the other things you’ll find in the next version of BBM.

With millions of you depending on BBM to connect with your most important contacts, we want to provide the best messaging experience possible. So, we’re taking your feedback and we’re trying to knock it out of the park by bringing new features and improvements to BBM on a regular basis. We know customers want to be able to share pics with multiple people in a chat. The next release of BBM will support photo sharing in multi person chats. This comes as an addition to existing sharing options that exist in multi person chats – sending voice notes, sharing your location powered by Glympse, and sending files from your Dropbox account. We also understand that customers want to be able to send larger files through BBM. While our file size limit on shared files has historically been set at 6MB, we’re increasing this to 16MB in the next release of BBM. What this means is that you’ll be able to send bigger pictures, larger documents and longer videos. For example, the 6MB transfer limit today allows you to send 6 seconds of 1080p HD video (recorded on a BlackBerry Z30 smartphone). With the increase to 16MB, you will be able to send 16 seconds of video using the same settings. We’ve also increased the size of the emoticons slightly after feedback from you, our customers.

We’re listening carefully to the feedback users are providing and follow posts to fan forums and the BlackBerry support page closely. Thank you for sharing your feedback with us and please keep it coming!