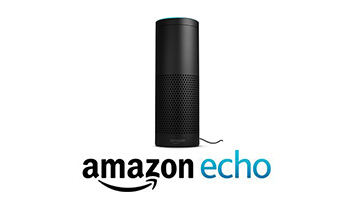 If you enjoy the latest innovations in tech (especially computer geeks), you probably purchased the Amazon Echo over the holiday season or received one as a gift from a loved one. The powerful device is already becoming popular with a range of people who have come to trust Amazon’s growing brand. Below are five interesting facts about Amazon Echo and the product’s technology.

The Amazon Echo is powered by Alexa, a voice service that offers different capabilities or skills to customers. Alexa’s powerful technology allows the device to recognize the customer’s voice, including their specific vocabulary and personal preferences. The Amazon Echo can play music, read the news out loud, and answer different questions, all by accessing the cloud via an always-on internet connection.

The device is always listening and scanning the surrounding environment. This functionality is similar to Outlier Security, a company that uses different scanning technology to bring together data from Windows operating systems and upload it to the cloud. Amazon Echo also uses a cloud to continually monitor what others are saying in the room. Since it is always listening, some people are cautious about privacy concerns and other hot button issues. Currently the company is fighting the federal government’s constant requests for Amazon to hand over its data transcripts for evidence in several ongoing criminal cases.

Originally Amazon Echo started with only a handful of apps, but now it has a large supply of apps or skills. Techcrunch recently published an article of one popular app that was recently added to the product’s database: CNN. The TV news network connects directly to the voice-based computing platform.

CNN’s app for Amazon Echo allows users to stream content that was on the air just five minutes after it was broadcast live on television. Users or customers can use Alexa to find out the latest information about politics, news updates, and international news by just asking the device. For example, if the user wants to listen to the latest Anderson Cooper interview, they can tell Alexa to stream the most recent episode. This means the app is sharing content directly from its current television programming to its streaming platform live. Users can have access to the latest news and shows in real-time.

This app is important because it is the first time CNN created a separate app for every Amazon device, including the Amazon Echo, Amazon Dot, and Amazon Tap. Previously the news network was only integrated with their technology to allow small news briefings. Typically different companies and news networks develop custom content for the Amazon devices, which is why their new app is unique. CNN has a large video programming team that works in multiple platforms. The large company can transport their audio content to Alexa due to the technical infrastructure they  developed for CNNgo. Now CNN is considered one of the most streamed news sources on all devices that are powered by Alexa.

But it really has unlimited skills if you think about the fact that Alexa is built to answer questions. Thus, if you’re asking it to find you a lawyer in Vacouver, or a retirement specialist in Florida, it can do them both. It doesn’t need a new functionality to perform millions of tasks.

3. Many Companies Are Joining the Alexa Revolution

Another interesting fact about Amazon Echo is that many companies are joining them And use similar technology. For example, the company DotCom Development focuses on developing exclusively cross-platform mobile development for Android technology. Similar to the Amazon Echo, the company seeks to relieve people’s burden from having to navigate the Android landscape.

The Amazon Echo’s speech recognition software is due to its built-in speech unit selection technology. The Echo can understand what users are saying due  to sophisticated natural language processing (or NLP) algorithms. Amazon combined that technology into its main engine.

5. Customers Are Only Using a Small Proportion of Alexa’s Apps

According to Recode, many users are not using a large percentage of the readily available apps on Alexa. Although customers enjoy using the device to turn off their lights or stream their music, they are neglecting to use the thousands of other apps on the platform. Alexa has over 7,000 skills, but almost three-quarters of them do not have any reviews available. This is a strong indicator to analysts and other researchers that many people are not using them.

Another telling fact is that even when a user does enable a voice app, only three percent are likely to use the same voice app again by the second week. This means they are unlikely to become an active user. This is another telling sign that either Amazon is not doing an effective job at communicating how many apps are on their platform. Or possibly customers do recognize there are thousands of available voice apps but do not care enough to actually use them every day.

In the future, analysts believe Amazon should focus on educating their customers and encourage them to discover new voice apps. They can also work on trying different strategies to increase their retention rate. Industry experts estimate that almost 25 million Amazon Alexa and Google Home devices will be sold in 2017.